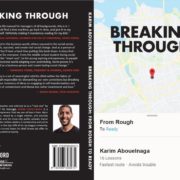 At 17, sitting overnight in a Queens jail cell on an overblown traffic violation, Karim Abouelnaga could not have imagined in his wildest dreams that six years later he would be numbered among Forbes’ “30 under 30.” Founder and CEO of Practice Makes Perfect, an education company dedicated to leveling the educational playing field for kids growing up in economically disadvantaged neighborhoods, Karim discovered in his late teens the “up elevator” of education – a rocket ride that took him from living hand-to-mouth on the streets of Queens to graduation from Cornell. In BREAKING THROUGH: From Rough to Ready, Karim reflects on the principles and priorities that changed his life so dramatically. He aims in these pages to inspire young people to come along his journey – in effect, to follow his lead in transforming daily life and habits of living from “rough” to “ready” – prepared in every way to reach the top in financial, social, and personal goals.

Karim is a Gratitude Network Fellow and the CEO of Practice Makes Perfect, a Benefit Corporation that partners with K-12 schools to deliver high quality, academic summer programs. He founded Practice Makes Perfect at 18. He writes for Entrepreneur, Forbes, Linkedin, and is working on releasing three books during Summer 2018. Karim is a TED Fellow and Echoing Green Fellow. At 23, he was named to Forbes’ 30 under 30 list in Education, and at 24 was named to Magic Johnson’s 32 under 32 list. In 2016, he was ranked in the top 3 most powerful young entrepreneurs under 25 in the world by Richtopia. He graduated from Cornell University with a Bachelor’s in Hotel Administration.